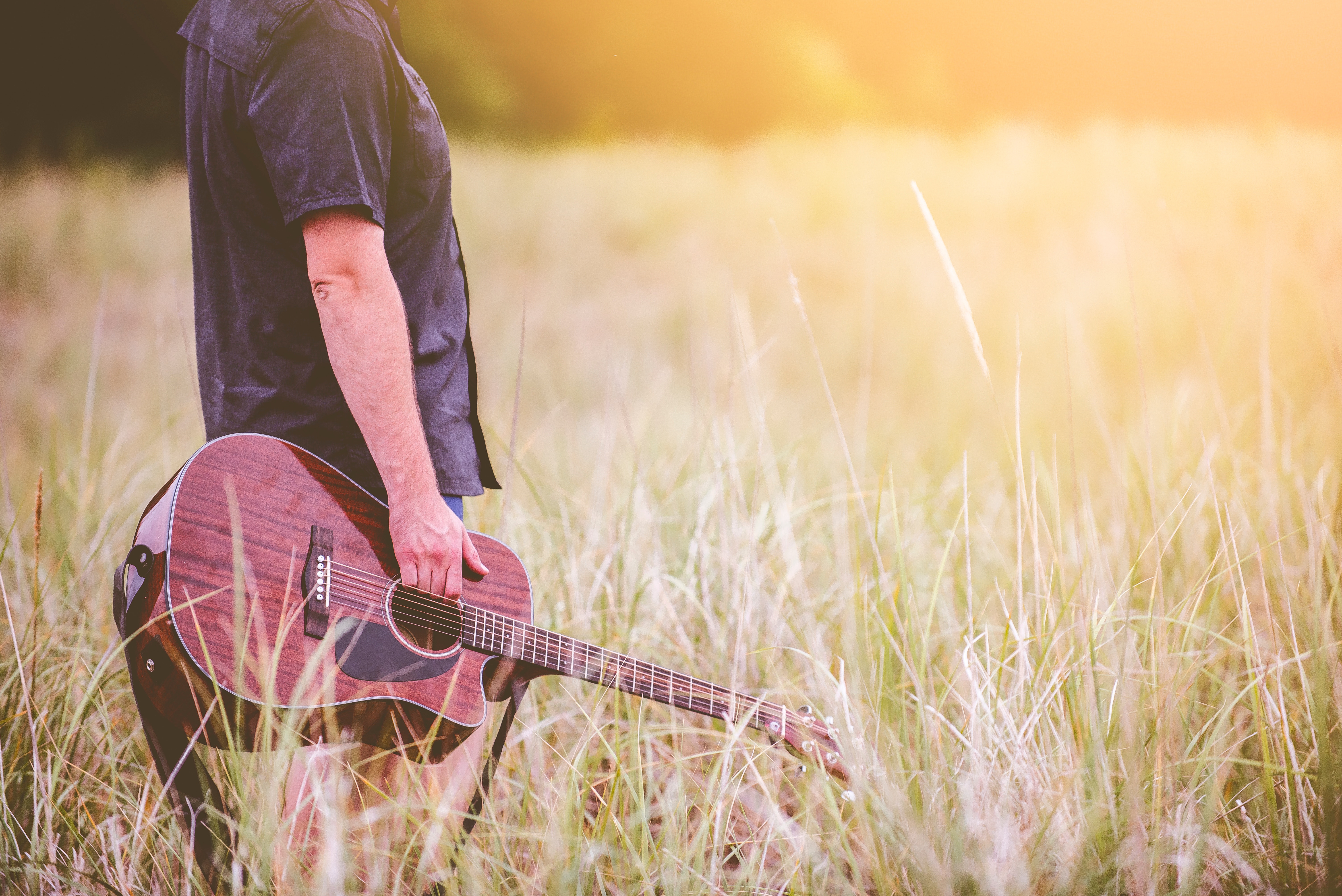 Like the elusive fountain of youth, people are constantly looking for the magic recipe or the secret sauce to become successful. While there are far more successful people in the world than I am, I would like to share some things that have worked for me over the years.

I am proud to say that I’ve been able to reinvent myself several times over the years, making “hard shifts” between unrelated industries, successfully landing on my feet - and thriving - each time. There were a few consistent themes each time I made one of these drastic changes. Since they worked for me, they may work for you, as well. As far as I’m concerned, these are the 5 things you need to do to be successful at just about anything.

I was a typical suburban-American kid playing in a band and planning for college. In between delusions of grandeur, I had high hopes of figuring out what I wanted to be at some point of the process. While I started out as a business major, it took me about five minutes to realize that business didn’t stoke my personal fire. I switched to communications because it offered a wide variety of options, such as journalism, TV, radio (and it required very little math to complete the degree!)

I landed my first career-oriented job at a major daily newspaper while still finishing college. Though I worked for one of the largest newspapers in the country, it was in the advertising sales department rather than in the editorial wing. I figured it was just a matter of time before I’d work my way downstairs and do what I originally intended to do - write.

What I failed to realize at that time was that major daily newspapers do not regularly hire newbies; they hire proven, seasoned veterans from their long list of candidates that already have a successful track record.

So when I woke up one day, eighteen years later, successful on the surface but thoroughly unsatisfied with my lot in life, I decided to make a change. The craft beer industry was booming and I wanted to get in on it.

After deciding I wanted to become a professional brewer and open my own brewpub, I figured I needed to 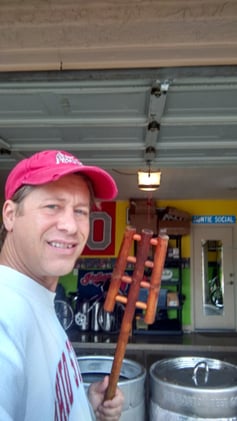 learn how to brew beer. I immersed myself in books on brewing beer, subscribed to magazines such as Brew Your Own and Zymurgy and joined my local homebrew club so I could surround myself with established brewers and like minds.

I brewed with every available spare moment I had, and before long, had become more than proficient. In fact, in a three-year period, I entered various contests and amassed 42 medals in competition. I was well on my way to reaching my goal of becoming a professional.

Shortly thereafter, I was offered a job working at a small Akron, Ohio brewery called Hoppin’ Frog. Owned and operated by a diminutive but talented brewer named Fred, I started at the absolute bottom. Fred agreed to teach me what he knew in exchange for working for beer. Within a few months, and several cases of hard-earned beers later, I had gained a lot of knowledge and proven my reliability. Fred offered me the position of assistant brewer. I had achieved my goal of becoming a professional brewer.

It turns out beer brewing is very physically demanding and the conditions are less than ideal. The idea of doing heavy physical labor sounded less and less appealing to me with each passing year. I started to have a change of heart about opening my own brewpub. One day I decided to shelve the whole idea entirely. I needed a new plan.

I took a moment for some deep self-introspection. I thought back to a time when I was purely optimistic and excited about my future. I thought back to my college years and put myself back into that mindset. What did I want to be back then? And then I remembered: if the music thing didn’t work out, I wanted to be a journalist. 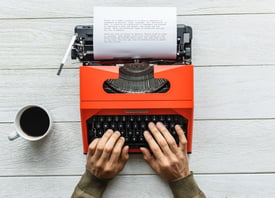 Writing appealed to me on several levels. No physical labor was involved, you can work from anywhere in world, do the job any time of day and write about an unlimited amount of topics. Creativity, a prerequisite to being a good writer, has always been one of my better attributes. I knew that I had a good grasp of the English language and that writing single handedly saved my college career, so I decided to give it a go. Major life shift number two was under way.

I approached two local publications and offered to write about topics I was well versed in: craft beer and music. They both accepted although one of the publications would only publish my stories on a gratis basis. While working for free didn’t thrill me, I knew I needed to build a resume so I contributed material for an entire year to this publication without pay. I was focused and I was committed.

Writing week in and week out for over a year and half really honed my skills. Before long I was in contact with my current employer. I had taken a skill of mine that was previously a hobby and turned it into a profession.

I had the very specific intention of becoming a professional writer, just as I had the same intentional drive to become a professional brewer previously. I did what I had to do to get there, including fighting resistance all along the way. I didn’t need to be well versed in everything, I just needed to become a specialist in the art of writing, in the same manner I learned very instinctively to become a proficient brewer.

When I started writing about beer and music for the local publications, I didn’t know where it would lead, and certainly couldn’t have predicted I’d become the staff writer at TTI Success Insights. But I did a little something every day toward my goal, and had a blast all along the way.

Not only did I get immersed in the local brewing scene being the local specialist, I got to meet many of my musical inspirations when I wrote music-related stories. In some ways, I was able to live out childhood dreams as an adult that I didn’t follow through with when I was a younger man. Better late than never.

Regardless of whether I was trying to finish my degree, learning to brew or striving to become a professional writer, there were common themes that have always been present in my life.

These themes are evident throughout my story. You cannot be focused unless you are committed. It all starts with making the commitment. Once you become committed, then you need to hone your focus.

Whatever area it is you wish to pursue, learn everything you can about that area, but only about that area. There are only so many hours in the day, so keeping yourself laser focused and spending time doing something toward your goals every day is paramount. Progress can vary day to day, but you want to make some sort of progress every single day. Doing so creates fuel because progress builds on itself.

When I think back to the brewing phase of my life, I’m reminded of the importance of forming a mastermind group. This does not need to be anything official, like a board of directors meeting, it can be as simple as a group of people who communicate through email or social media. The point is you want to have people on your side who have done what you want to do, and hopefully have done it well for awhile. They know the ins and outs of the thing you are pursuing. Use their successes and pitfalls to shorten your learning curve.

When I decided to become a professional brewer, I formed a mastermind group that featured professional brewers from leading craft breweries, along with some of the most accomplished amateurs. I would present a topic and everyone in the group would add input. This lead to members of the group becoming friends. The knowledge that came from these sessions was invaluable and sped up the learning process exponentially. Forming a mastermind group, in my opinion, is one of the smartest things you can do when you want to master a new craft.

Anytime you are undergoing a major life shift, a lot of things have to fall into place. And sometimes a little touch of serendipity helps push you forward. You can create some of your own serendipity by focusing on these five consistent themes mentioned throughout. Start by committing then getting and staying focused. Being intentional in your process and instinctive about your learning will keep you on track. You can accomplish anything you set your mind to by doing something every day, especially with other like-minds, who will help keep you on a path to success.