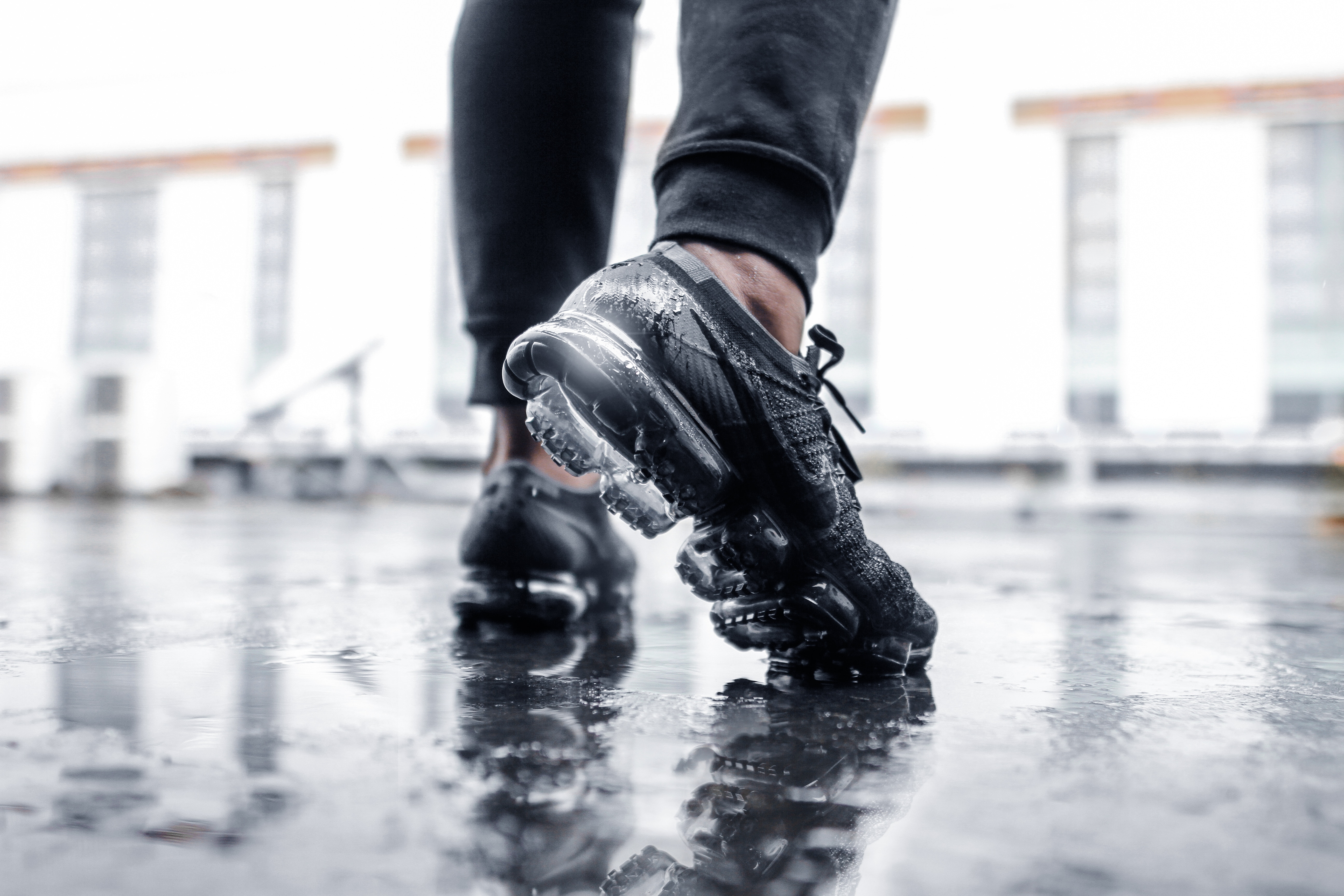 Behavioral assessments such as DISC can help uncover interesting insights about a person’s behavioral styles. This information can then be used to improve performance or help a person to find a job that may be most suited for their natural abilities. 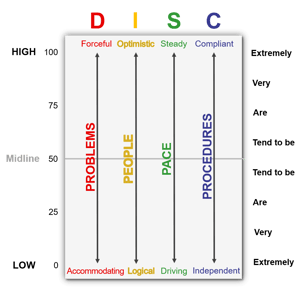 Let’s overview DISC Behavioral Styles on a graph to give you a better understanding of the highs and the lows (see DISC graphic). There is a midline (also known as the energy line) at 50 and any factor above is considered “high” and any factor below is considered “low.” High is not good and low is not bad - this is just a continuum of behaviors all exhibiting different degrees of intensity. If you fall in the “extreme” range (0-10 or 90-100), these factors are much easier to observe but more difficult to adapt. If

you fall in the “tends to be” range (40-50) these factors are harder to observe but much easier to adapt up and down depending on the situation.

Strengths can become weaknesses through overextension

So often, what endears a leader to others can become their very undoing. Someone with urgency and precision can be a master at completing tasks, but may find themselves lacking when it comes to the human element. Someone else who is supportive and caring may have a hard time having difficult conversations when these conversations need to be had. While others who are great with details and processes may tend to be methodical micromanagers. For every yin there is a yang, and uncovering those weaknesses can help shore up a leader’s ability to rally his or her team to become engaged and highly productive.

Bob is a young professional with high potential who works in the finance department of a large company.His boss thinks he is fantastic because he gets everything done quickly and with great precision, which makes the boss look good. Although Bob is already in a management role, his boss wants him to get promoted to a higher-level leadership position.

All is not perfect, however, in Bob’s camp. One of his direct reports recently quit and two others have been complaining about his management style. They say he has unrealistic expectations, is critical, condescending and does not care about them personally. Bob’s boss asked me to coach him on his “people skills.”

When I met with Bob the first time and asked him what he would like to get out of the coaching, his reply was less than encouraging. He deadpanned, “Can you get those girls that report to me to stop crying?” Seeing the challenge ahead of me I responded by saying, “Absolutely; when we change your behavior they will stop crying.”

As I began to work with Bob, it was evident his “get it done now (D) and get it done right (C)” style has it benefits, but also some downfalls. When working with someone who has a very intense dominance and compliance personality, it’s all about completing the task quickly and to perfection. A person with this type of personality can set expectations so high, they may never be met. Before long, the staff becomes disengaged because they feel they are fighting an uphill battle they can never win.

We focused on lowering the standards a little so his staff can achieve goals and gain some confidence. It was not a case of settling, rather simply creating a baseline from which to build. Then, after little victories occurred, we raised expectations a little at a time. We also looked at how to work better with the “girls” in the office. Having predominantly interpersonal behavioral styles (high I), they wanted to have a personal connection with their boss; it gave them a reason to work harder. Just as football players will run through a wall for a coach they admire, this team was looking for a similar connection.

After our sessions, Bob dialed down his expectations somewhat, began to delegate a little more and began to take a personal interest in his direct reports. He made time to get to know them on a personal level and they responded. Within six months the “girls” were accomplishing more than they had ever expected.

Building connections with his staff went a long way towards his success although it was difficult, at first, for Bob. He said he felt disingenuous, because he just wasn’t the kind of person interested in small talk. Once he took the time to find common interests (i.e. kids playing sports) he no longer felt like he was forcing small talk and instead looked forward to the conversations.

His staff started to feel a genuine connection to him and it built trust. At first Bob was great at business but lacked the necessary people skills. Now that Bob has both the people and the business skills he is on the fast track to being promoted and his staff is fully engaged.

Example #2 – Supportive and caring, but averse to confrontation (High I/S and low D/C)

Sara is a fairly new manager in a fast-paced call center environment. She was promoted because of her customer service skills and how willing she is to always help others when needed. Everyone loves working for her, especially since the former manager was known to be a bit forceful and rude.

While Sara is well-liked and respected, her team was not meeting the metrics needed to be successful and were starting to get customer complaints. Her boss suspected that Sara was not holding her staff accountable and not having the needed performance conversations. Complicating matters was the fact that her direct reports were her peers just a couple of months ago, and going from peer to leader has been somewhat of a challenge for Sara.

During a recent training session, the team is asked to share what they appreciate about Sara, it’s apparent how much her friendship and support has meant to them. Some of the team members are brought to tears with positive stories about Sara.

The next part of the training exercise required each person to share with Sara exactly what they need from her to be successful in their role. The majority of the group members commented that issues were not being confronted and tough decisions were not being made fast enough. These delays were negatively impacting working with their clients. There was also a common undertone that Sara was not addressing some team issues which made some team members feel slighted.

I worked with Sara to understand that it was her positive and connective (I) as well as her caring and supportive (S) styles that got her the job, but these same attributes may be the very thing that is keeping her from producing results for the team. We worked to help her understand that people want feedback and need to have performance conversations (even the negative ones) to grow in their positions. She realized that if she didn’t have these conversations, she’d lose credibility with the very people that adore her and she’d become ineffective as a leader.

Because of her behavioral style, I drive home the point that hers is actually the best style to have these hard conversations because her team knows she has their best interests in mind. Sara is now trained on viewing business decisions with the same importance as people decisions. After working hard to change her behaviors, the metrics went up, customer complaints went down and the team admires her even more for holding them to a higher level of accountability.

Gregg is a leader in an IT department and every project he works on comes in on time and on or under budget. Gregg was chosen to participate in a Leadership Program that I was conducting, a pretty big honor at this company. Except Gregg didn’t initially see this as an honor. He saw it as a waste of his time.

Gregg has been an efficient, effective worker but suffered from a case of elitism, thinking he knew everything he needed to know to excel at his job. He went as far as to ask me why he was being forced to “waste his time” coming to the sessions since he consistently meets or exceeds his goals. While Gregg didn’t think he could get any benefit, his company realized that he had the potential to be much more productive if he could get out of his own way.

I asked him to participate in the next session and promised if he didn’t find value I would talk to the “powers that be” about allowing him to step out of the program. During the second session we focused on behavioral styles and the strengths and possible limitations to leadership. We also had the participants create Leadership Mission Statements, about who they wanted to be as a leader going forward.

For Gregg, everything changed when he realized micromanaging doesn't get you the best results. We talked a lot about engagement. His team performed well, but they weren't engaged. They weren't engaged because he micromanaged them to get results. While he was happy with his end result, he began to see the benefits of being able to achieve similar results in less time and with less stress.

Gregg recognized that he wanted to delegate more, use the skills and experience of his team and not micro-manage as much as he had in the past. He went back to his team and told them the parameters of the next project.  He told them he trusted them to complete it on their own. He assured them that if they needed anything they could come and ask, but otherwise he was going to step back and let them do their thing.

He decided to continue on with the sessions after all. At the fourth session, Gregg reported to me that for the first time ever, the project he delegated had come in two weeks early and 15% under budget. He admitted it was very hard for him to give up control and risk his perfect track record, but he said his staff was so engaged that they can’t wait for the next project. By delegating to his fully able team, it provided the additional benefit of giving him time to work on more strategic issues that gave him more credibility with the Senior leadership team. The team became more engaged while Gregg grew as a leader.

All three of these people featured above were doing fairly well before using DISC for coaching, but high performing leaders are always looking at how they can improve. Although it’s easy to observe how a leader’s strengths produce results, it’s more difficult for them to accept and want to change those things that are limiting their success. This is what's great about understanding behavior styles; it highlights both the strengths and opportunities for development.

Becoming aware of the weaknesses may be the most important part of the process because these weaknesses can be the Achilles heel to the leader. Understanding the styles can help a leader behave more effectively, especially when they are willing and able to adapt their behaviors to fit the needs of their teams. Expose your weaknesses, work on those and they will let your natural strengths shine through even more than they did before. 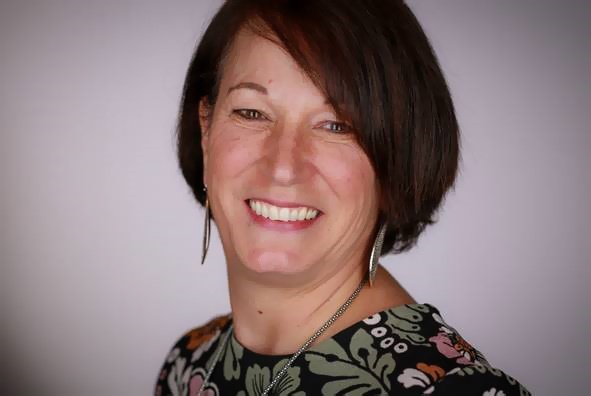 Lisa A. Bouchard is the president and owner of Data Dome Inc. Her main focus is to ensure organizations achieve their goals by developing leaders and teams to their full potential. Much of her time is spent training and supporting internal trainers to lead successful programs. 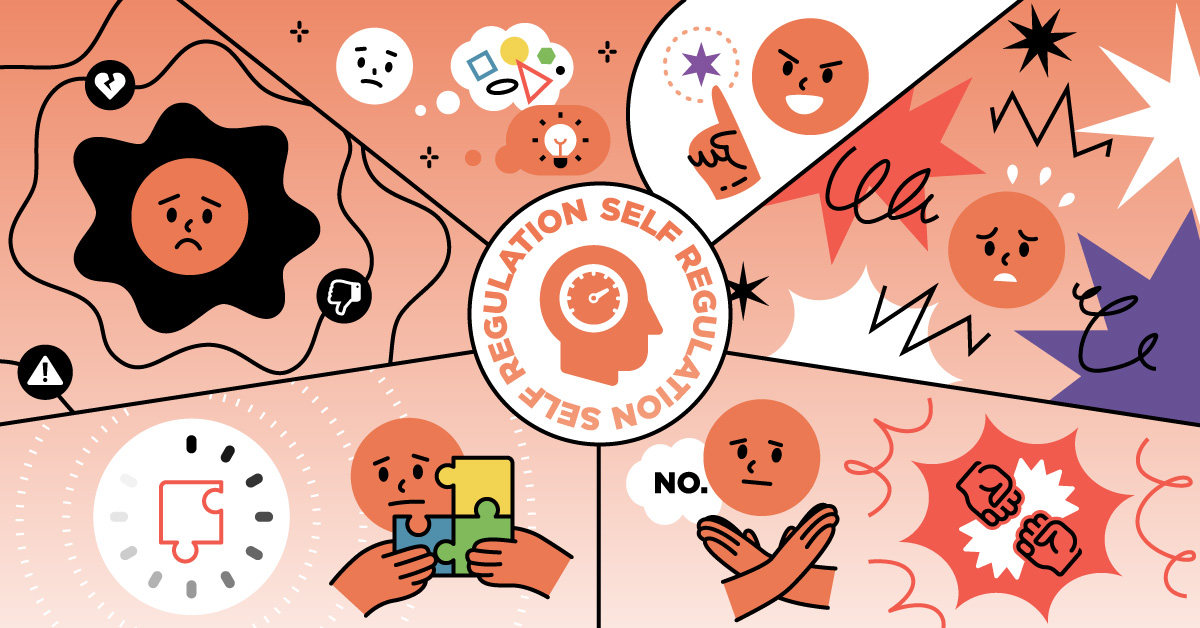 5 Ways Low Self-Regulation is Holding You Back