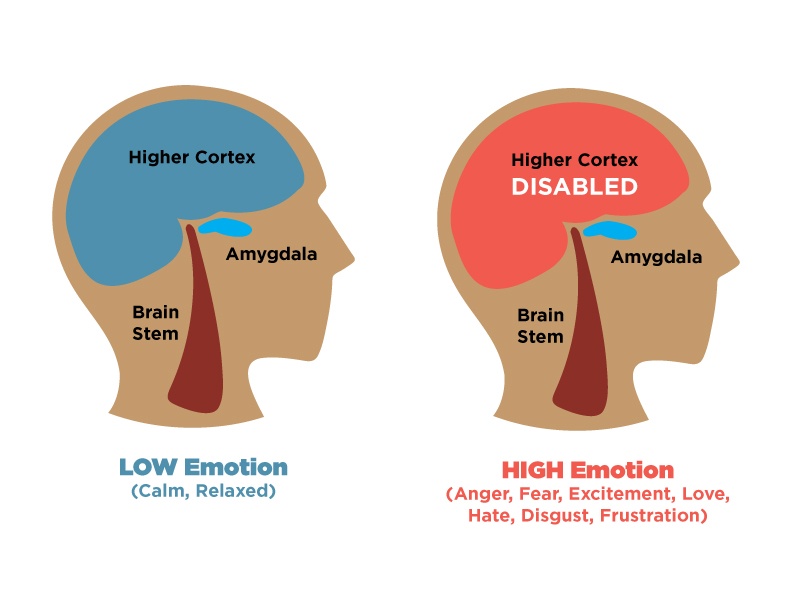 Everyone knows someone who gets emotional, or even fears getting on a plane. The person tenses up, hands turn clammy, and they become generally irritable simply by driving to the airport. Although this person may be the pillar of common sense and practicality in any other situation, when they get on a plane they morph into a completely different person; almost a Jekyll and Hyde response.

Why is this? In most cases it’s an issue of control. When getting on a plane, they have absolutely no control since control lies with the pilots. Because their control has been taken away, an irrational response of fear, irritability and even panic is exposed.

Emotional hijacking works exactly the same way. When someone is put into a stressful situation, their brain function is actually altered, and their reaction can quickly turn from reasonable and rational to primal and reactive. Emotional hijacking is a term that anyone in the workforce needs to understand, be aware of, and act to keep under control.

Emotional hijacking is often referred to as “amygdala hijacking” since that is essentially what happens in the brain during these times of crisis. The term amygdala hijacking was first coined in Daniel Goleman’s book, Emotional Intelligence. The amygdala is the emotional part of the brain which regulates the flight or fight response. In flight or fight, our brain senses imminent danger and blasts adrenaline into our bodies to cope with the perceived danger at hand.

There are two critical things you can do to avoid an emotional hijack. The first is to increase your emotional intelligence. The second, is to identify and proactively address your triggers.

According to Mark Debinski, President and Founder of Bluewater Advisory, “90% of the difference between star performers and average performers in senior leadership positions is EQ.” Leaders at successful companies tend to have very high emotional intelligence. This intelligence helps them to successfully lead and grow companies exponentially in size, while seemingly possessing the ability to always make the right decision at the right time.

So how can you increase your emotional intelligence? By being aware, making choices to take a break, and proactively empathizing.

The good news is, just like muscles, emotional intelligence can be strengthened. Practice makes perfect and it all starts with identifying the stressors or stimuli that trigger these responses. Once the stressors are identified, the key is to diffuse the emotional outburst before it occurs. When one encounters a stressful situation and finds their heart racing, muscles tightening and mind spiraling into a reactive mode, the absolute best thing they can do is hit the “pause” button. Think of it as defensive driving in the workplace.

People are all wired differently. Those in better control of their emotions are more likely to thwart emotional hijacking than those who lack emotional control. For someone more sensitive, small things can set a person off. These stressors can surface through any of our senses and can manifest themselves physically, mentally or emotionally. Some people can be triggered by physical things such as bad smells, someone chewing with their mouth open, or a co-worker talking too loudly while another worker may be set off by emotions triggering from political or religious conversation. Have you ever gone ballistic when someone inexplicably cuts you off on the highway? Road rage is a classic example of emotional hijacking. And, it’s important to understand that emotional hijacking can take place in a highly-charged, positive situation just as easily as it can in a negative one.  Think: rowdy fans celebrating a world series victory by smashing windows. Anger, fear, excitement, love, hate, disgust and frustration are all things that can trigger a potential emotional hijacking.

So what do you do when you realize you’re in the middle of an emotional hijack? Use these three tips to help you: